Yesterday (7 February 2020), St. Mary’s College of Divinity at St. Andrews had an event to honor and remember Tom Wright (a.k.a., N.T. Wright) for his tenure at the university. Professor Wright held a distinguished chair in New Testament for nearly a decade (a chair previously held by Richard Bauckham). As Professor Alan Torrance mentioned yesterday evening, he was responsible for millions of pounds being poured into St. Mary’s via student enrollment and grants. He was also instrumental in Logos (the program I study in) starting and being developed at St. Andrews. But I want to point out a few other ways that I have benefitted from his lifetime of scholarship.

When I was a high school student, I first heard the name N.T. Wright when my pastor and worship pastor wanted to take a group from the church to Oklahoma Christian University where he was speaking. The trip ended up being cancelled, and I didn’t get to go. (I would then meet him New Orleans some years later where he signed every book I had by him at the time, and then I would have classes with him some years after that.) Instead, I wouldn’t interact with Wright’s work for another couple years until I picked up the book Simply Christian and then Simply Jesus after that. Again, I wouldn’t interact with his work in any meaningful way until my undergraduate years.

The two primary things I learned from N.T. Wright which I should have known, but never did, were: the Jewishness of Jesus and the New Testament, and the Christian hope of future resurrection. I grew up in Christian communities that never spent much time thinking about how deeply Jewish Jesus was or the four gospel accounts which talk about him or Paul’s letters or any of it. Jesus is Jewish—not formerly or temporarily Jewish. Jesus continues to be Jewish, as does the New Testament. How are we to read the gospel accounts, Acts, Paul’s writings, the letter to the Hebrews, or the letters from Peter or John or Jude if not as profoundly Jewish texts? Yes, they often write to a wider audience—especially Paul’s letters, but they do so from a religious background and history of thought which is profoundly Jewish.

Finally, Tom Wright taught me the Christian hope. I always imagined death to be the end. I don’t mean that I thought we would just die and that there would be nothing. But I did imagine that we would die and go to heaven—some would go to hell—and that everything would just be disembodied and ethereal. However, in reading Wright’s works, I realized that the New Testament teaches something profoundly different. It teaches that God will raise us bodily from the dead in the end and bring heaven to earth. It teaches that if God doesn’t raise us like Jesus, then we ought to be the most pitied because we are wasting our lives. I can’t even recount the experience of reading The Resurrection of the Son of God for the first time. If I could get everyone to wade through its hundreds of pages, I would want every Christian to read it.

I grew up like many others reading picture books that wanted to teach us about kindness. I’ve even heard some in the church bemoan these books because it teaches people to be moral without teaching them about Jesus (the ultimate exemplar of virtue/morality), and it teaches them to care more about kindness than conviction. I’m less concerned about those particular issues when it comes to children’s books in public schools and doctors’ waiting rooms. However, I find it funny that with all these books and lessons that I have grown up with how unkind people can still be. It only takes a few minutes scrolling through social media or flipping through channels on television to learn that lesson. But despite this lack of kindness, there is actually so much around us. In this post, I want to share a point made to me about kindness and a couple experiences that I have recently had.

1. Can you do anything for Christ in an un-Christ-like way?

Without much information and perhaps as an act of faith, I trusted the advice of two people I barely knew (I met one in London and the other in Cambridge), and I reached out to a stranger living in St. Andrews. He welcomed me to his home, shared a pot of tea with me, invited me to stay for dinner with his family, and gave me some great advice and encouragement. I don’t want to rush to judgement, but he was possibly one of the wisest people that I have ever met.

While I met with him, he emphasized kindness as an important virtue for Christians to have. (This was unsurprising because of how well he was treating me.) He had just returned to town after teaching a week-long ethics course at a seminary. There he posed this question to his students, “Can you do anything for Christ in an un-Christ-like way?” It’s a question that hits you like a ton of bricks as you realize how un-Christ-like you have been in many situations where you once felt justified. It’s a question that demands only one answer, “No!” The ends do not justify the means. Jesus approached people with love—even his enemies. We are without excuse.

This question has been on my mind ever since.

2. A Cup of Tea, a Kind Concern, and the Power of Love

With this question deeply on my mind, I got sick. It was a week or so after that meeting (this last Saturday), and I woke-up with a sore throat. I was distracted all day with a day trip to Loch Tay, but that evening it returned. Sunday was rough again. Monday was dreadful. I barely made it through class. Tuesday was better, but when I arrived for class in the afternoon, one of the other students had brought me a green tea with ginger and honey from the shop he was studying in before class. (He commented that the person making the drink really wanted to add whisky to it.) It was one thing that he remembered that I wasn’t feeling well; it showed how thoughtful he was. It was an entirely other thing that he was also kind enough to do something for me. He didn’t just pray, which would have been enough, but he went beyond what was hoped, expected, or encouraged of him.

I have also had an instructor take special care to help me intellectually and pastorally with some of the content covered in class. He has taken the time to meet with me to discuss the content covered, and he has stayed after class and during breaks to ask me about the questions that I brought-up during the class time. He has not only been kind enough to meet with me, but he has also taken the initiative to reach out to me. Again, it’s been a time of seeing people be intentionally kind and loving to me.

I can’t think of anything greater, or more meaningful, than experiencing God’s love, and it can be difficult sometimes to have those experiences. But God has chosen to work through the church, through a community of Jesus-people. When we join in fellowship and discipleship with the Jesus-people around us, we can quickly and joyfully find the love of God waiting for us.

I keep waiting for a good time to sit down and summarize my life in Scotland right now. I keep waiting to get through one more event or activity to end my update with, but alas, things keep happening. If I wait any longer, I may just never write about my experiences. So today is my attempt for you to share in the story so far.

This month has been busy and exciting and nerve-wracking and overwhelming—all in the best possible ways. It has only been seventeen days since my last day in the US, so everything I share about my thoughts and feelings should be taken with a thick pinch of salt. However, despite the “new bike smell”, I do have thoughts and feelings about my lot in life. I live alone in a little studio apartment which will only feel smaller once I marry and get a new roommate. I have cooked nearly every meal I’ve had since moving in here, and I’m tired of washing the terrible pan that everything sticks to. I have two coffee cups which are on constant rotation in the washing because of my fondness for two or four cups of tea in the first half of my day. I ride my bike into town most times because it turns a twenty minute walk into a seven minute frenzy.

I fill my day reading, and watching an occasional Netflix show that isn’t available in the US—they have a better variety except for the devastating lack of The West Wing. I found a nice library and a couple other places to study. I have met kind people, wise people, strange people, and smart people. I have met Scotts, Germans, Indians, and far too many Americans. But I have loved it all. 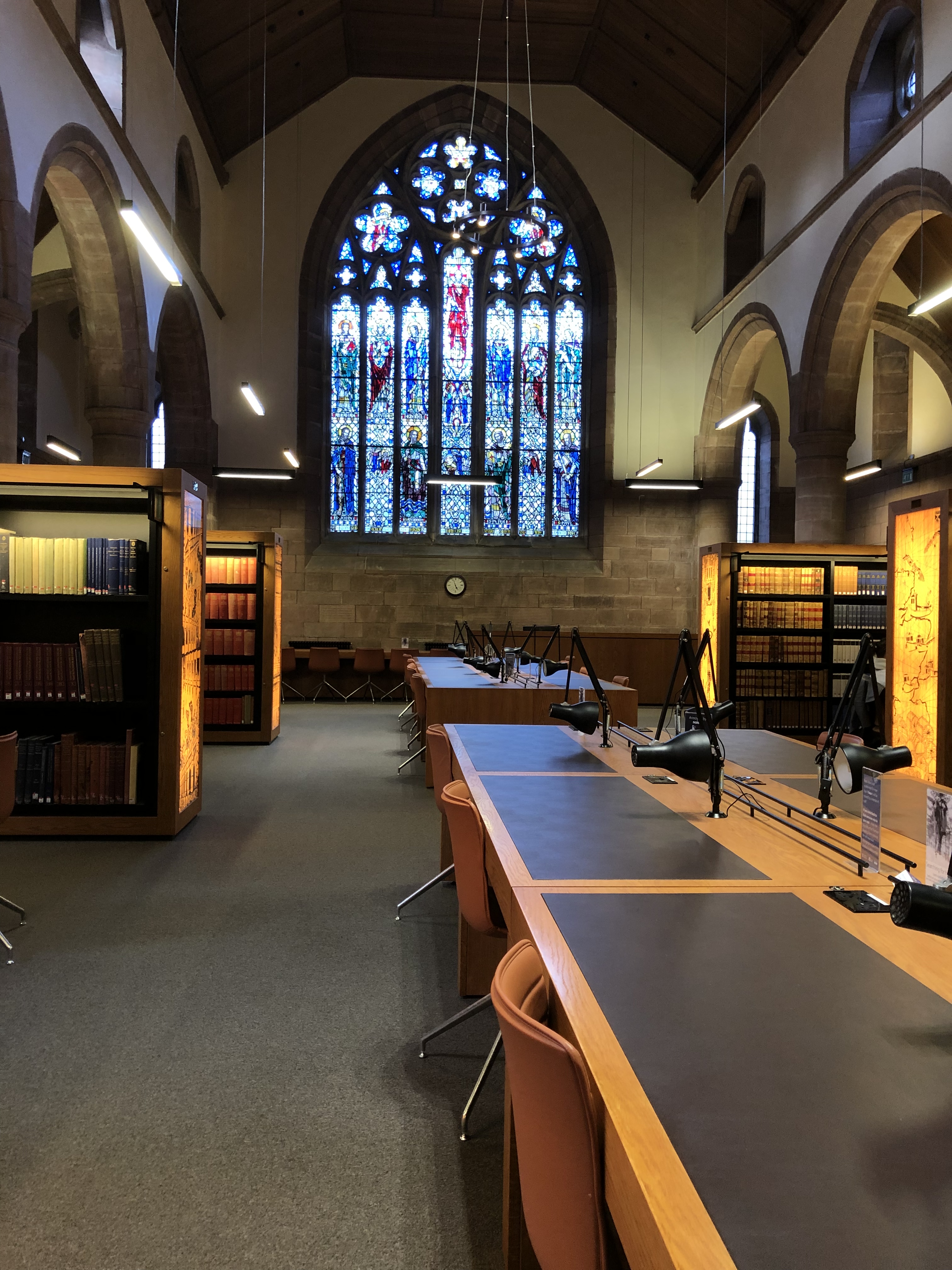 I had plenty of welcome events the last week to attend, but I finally attended my first week of classes on Monday and Tuesday (16 and 17 September). I listened to N.T. Wright saying things that I completely agreed with and others that I completed disagreed with while I sat by his side. I had a couple Scottish lecturers lead riveting discussions on philosophy’s role in theology and the doctrine of Creation. I met a stranger and shared a meal with his family, and I saw a lifetime of wisdom face-to-face. I wrote an article, I read an essay, and I tried to not talk too much in class. I’ve had FaceTime calls, and I’ve had long messages. I’ve made friends and had fun. I’ve watched lectures (including my first Gifford lecture!). I have engaged great scholars, and I’ve let myself dream.

Without diving into too much detail or boring you too much, this has been my first seventeen days.